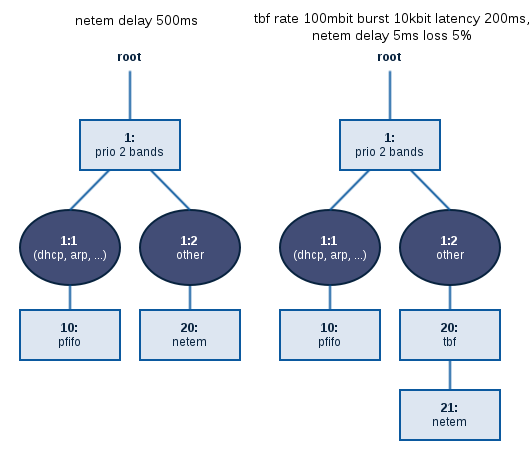 This three-part series describes how an impairment node can be set up using Linux Traffic Control. In the first post Linux Traffic control and its queuing disciplines were introduced. The second part showed which traffic control configurations are available to impair traffic and how to use them. This third and final part describes how to get an impairment node up and running!

We already know how Linux Traffic Control works, what queuing disciplines are available for impairing traffic and how to apply one ore more of those qdiscs to an interface.

Our goal is still to create an impairment node device that manipulates traffic between two of its Ethernet interfaces eth0 and eth1, while managing it from a third interface (e.g. eth2).

First, we need a system on which the impairment node will run. Luckily, both the hardware and software restrictions are minimal.

The hardware should (1) be able to run a Linux operating system and (2) have at least 3 network interfaces. There are multiple vendors of small dedicated network devices (Portwell, Lanner, PCEngines,…) suitable for this task, but an older desktop computer should do the job as well. Running multiple impairments configurations in parallel or impairing multicast traffic obviously requires additional network interfaces (unless VLANs are used).

Since all Traffic Control functionality is located within the Linux kernel, it is available in all modern Linux distributions. So as far as software is concerned, a fresh server installation of any mainstream distribution (Fedora, Ubuntu or Debian) is ok!

To achieve this, all Traffic Control operations are hidden within a single shell script, which you can find on GitHub under a permissive license.

While it is possible to change existing impairment configurations, its simpler and safer (especially during development or debugging) to always start with a clean slate. This is also how the script operates.

Note the script explicitly excludes network management traffic – ARP, ICMP, IGMP, ICMPv6, DHCP and DHCPv6 – from impairment, since such traffic may be required to set up an impairment scenario.

Impairment configurations can be passed to the script in a declarative way, either directly on the command-line or through the configuration file.

Each impairment configuration takes one of the following forms:

Some example configurations and how they are handled by the script:

As we explained in the previous post, we typically only need the netem and tbf filters, so chaining two different impairments should suffice. The example tc.conf file on GitHub contains some more ideas.

The script prints out what it is doing. As an example, we specify a bidirectional impairment configuration for VLAN ID 2000.

Of course the implementation described here (and available in our impairment-node repository on GitHub) is specific to our needs and has itself been constantly evolving – allowing two qdisc definitions that are chained together was the latest addition.

The script can be freely adjusted and used (i.e. in accordance with the 3-clause BSD license) to suit other situations.

Whether you use the provided script directly, adapt it to your needs or simply take this blog post as a starting point for a fresh implementation, I’d love to hear about your specific use cases and the approach you are taking. Feel free to share them through the comments below!