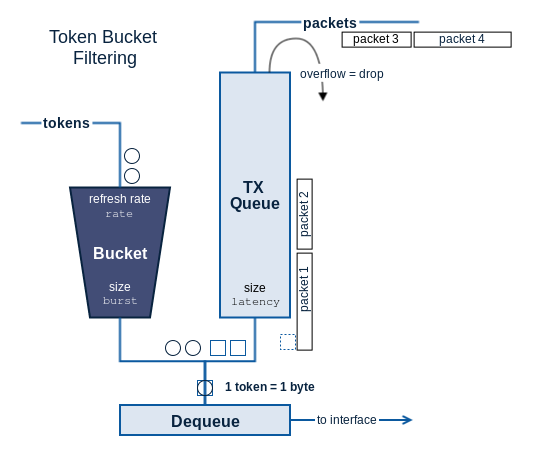 This three-part series describes how an impairment node can be set up using Linux Traffic Control. In the first post, Linux Traffic control and its queuing disciplines were introduced. This second part shows which traffic control configurations are available to impair traffic and how to use them. The third and last part will describe how to get an impairment node up and running!

Our goal is still to create an Impairment Node device that manipulates traffic between two of its Ethernet interfaces eth0 and eth1, while managing it from a third interface (e.g. eth2).

To impair traffic leaving interface eth0, we replace the default root queuing discipline with one of our own. Note that for a symmetrical impairment, the same must be done on the other interface eth1!

While changing a qdisc directly (using tc qdisc change or tc qdisc replace) is also possibly, the examples below start from a clean slate.

So which kinds of impairments are available to simulate network impairments? Let’s have a look!

Caveat: It is important to note that Traffic Control uses quite odd units. For instance, the kbps unit denotes kibibytes per second. This means that one kbps equals 1024 bytes per second instead of (the expected) 1000 bits per second. On the other hand, kibibit (for data) and kibibit per second (for data rate) are both represented by the unit kbit. For a full overview, see the UNITS section of the tc man page or this faq post.

To limit the outgoing traffic on an interface, we can use the Token Bucket Filter or tbf qdisc (man page, read more, picture). In the tbf queuing discipline each outgoing traffic byte is serviced by a single token. These tokens are refreshed at the desired output rate. Tokens are saved up in a bucket of limited size, so smaller bursts of traffic can still be handled at a higher rate.

This qdisc is typically used to impose a soft limit on the traffic, which allows limited burst to be sent at line rate, while still respecting the specified rate on average.

Set the root queuing discipline of eth0 to tbf, with the output rate limited to 1 Mbps. Allows bursts of up to 32kbit to be sent at maximum rate. Packets accumulating a latency of over 400 ms due to the rate limitation are dropped.

Using extra options we can limit the peak rate at which bursts themselves are handled. In other words, we can configure the speed at which the bucket gets emptied (read more, picture). By using the same value for both rate and peakrate, we can even put a hard throughput limit on the output.

Set the root queuing discipline of eth1 to tbf, with the output rate limited to 1 Mbps. Since bursts are also transmitted at a peakrate of 1 Mbps, this is a hard limit. However, allow a minburst of 1520 bytes to be sent at maximum rate, so a typical packet can be sent at once (note 1514 bytes is a typical layer 2 MTU). Packets accumulating a latency of over 200 ms due to the rate limitation are dropped.

Using the netem qdisc we can emulate network latency and jitter on all outgoing packets (man page, read more). Some examples:

But netem can even emulate more complex loss mechanism, such as the Gilbert-Elliot scheme. This scheme defines 2 states Good (or drop Gap) and Bad (or drop Burst). The drop chances of both states and the chances of switching between states are all provided. See section 3 of this paper for more info.

Packet duplication and corruption is also possible with netem (man page, read more). The examples are self explaining.

Finally, netem allows packets to be reordered (man page, read more). This is achieved by holding some packets back for a specified amount of time. In other words, reordering will only occur if the interval between packets is smaller than the configured delay!

Configuring a single impairment is useful for debugging, but to emulate real networks, multiple impairments often need to be active at the same time.

Multiple netem impairments can be combined into a single qdisc, as shown in the following example.

To combine these impairments with rate limitation, we need to chain the tbf and netem qdiscs. This process is described in the first post of this series. For example, it would lead to the following commands:

Simply switch the two qdiscs to have the packet’s rate limited first and the impairment applied afterwards.

Towards an impairment node

All buildings blocks are now in place to configure an actual impairment node. This is the subject of the third and last blog post in this series!