Our first impressions of Wi-Fi 6 devices

Do the newest smartphones and routers support the new standard?

You’ll likely come across three different terms when reading about Wi-Fi 6. It has also been called High-Efficiency Wireless (HEW), and these two names are more marketable alternatives to 802.11ax, which refers to the specification standard. Wi-Fi 6 is the next generation of network specification, and it offers unique capabilities – but do new devices support these capabilities?

Most of the complaints about Wi-Fi speed usually arise in crowded environments where multiple devices are all trying to access the same network. You can compare this to a busy airport: no matter how fast your airplane can fly, you still have to wait your turn to take off because only one airplane can use the runway at a time.

Wi-Fi transmissions slow down because every contender must wait for their turn to access the available airspace after all other transmissions have finished. Performance is limited by how long a device has to wait until other clients are done transmitting their data. This causes severe latency. The effect is that media streams play with noticeable delay, gamers experience lag and websites load very slowly. 802.11ax claims to get latency down by as much as 75%.

The main addition of Wi-Fi 6 to existing wireless technologies is the ability for devices to transmit simultaneously using a modulation technique called OFDMA. We won’t go into too much detail here about how all this is realized. Let’s just say that the single wide Wi-Fi spectrum is split up into narrower bands that can be accessed by multiple devices at the same time.

Multi-user MIMO is the technique that allows transmissions from devices to the access point over multiple antennas. Before 802.11ax, this was limited to the downlink only, but it has now been extended to include the uplink as well.

We took a look at the currently available 802.11ax devices. We chose to use a Samsung S10 smartphone as a Wi-Fi client. We selected two devices to use as access points, with the first serving as a stand-alone access point and the second to check the Wi-Fi backhaul between access point and a bridge or mesh node.
We selected an Asus GT-AX11000 Rapture Wi-Fi router and an Asus RT-AX88U router for this purpose.

802.11ax supports higher modulation orders, so when the Wi-Fi connection is very good (high RSSI and a clean spectrum), we would see higher throughput on the S10 than on the S7. Note that both devices are equipped with two antennas, so any speed differences are unrelated to the number of spatial streams.

An average Wi-Fi downlink speed close to 700 Mbps is quite fast for a smartphone. The uplink is impressive too, at an average of just below 600 Mbps. The difference between the S7 and the S10 is more than 150 Mbps – a significant boost. We even saw peaks hugging the 700 Mbps mark. 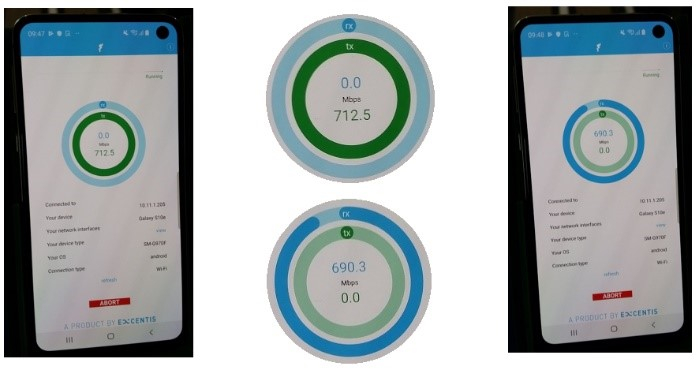 We also performed a different kind of speed test. This time, we took an Asus RT-AX88U and created a Wi-Fi mesh. With four antennas per device, we expected to go well over the 1 Gbps mark, so we divided traffic over multiple Ethernet ports according to the following schematic.

Our first results were very surprising. We did not get anywhere near the expected throughput: TCP traffic throughput didn’t even reach 1 Gbps, while UDP traffic maxed out at 1400 Mbps.

We hoped that this was due to the link overhead needed for the mesh operation. We changed the setup so that instead of a Wi-Fi mesh node, the RT-AX88U was now a Wi-Fi repeater. This time, we immediately saw a big jump in Wi-Fi network speed. 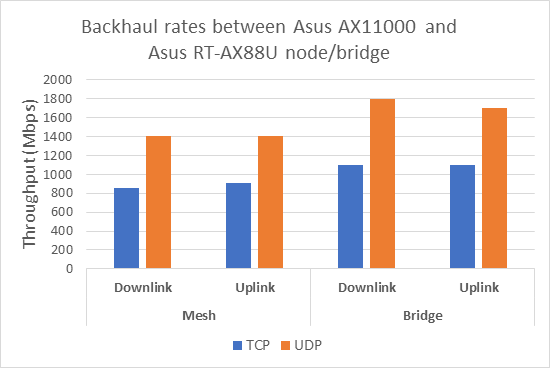 Whenever a new technology is expected to appear on the market, vendors quickly release devices that are hardware-ready. However, it is common for these early devices to not support all the features in their first software releases. By performing these tests, we could see whether current devices are 802.11ax-ready instead of 802.11ax-compliant.

Following up on the speed tests, it was time for a closer inspection of all the device’s capabilities.
One of the key capabilities is the support of OFDMA, which allows the division of the spectrum into many separate bands.

Immediately, it became clear that OFDMA is not yet supported by either the Samsung smartphone or the Asus Wi-Fi routers.

We found ourselves at the point where, admittedly, we aren’t really able to test most of the key capabilities of 802.11ax. The principal technique used to enable multi-user network performance improvement is not yet supported by either access points or clients as of early 2019.
We will be keeping an eye open for new software releases to be deployed in order to perform follow-up tests.

Based on our observations, devices that are currently on the market are likely not yet Wi-Fi 6 compliant but Wi-Fi 6 ready. We can expect to find more and more features added as time goes on. Although we were unable to test them, we are now looking forward to software upgrades that enable network speed improvements in crowded Wi-Fi environments, alleviating the universal frustrations associated with web browsing in a busy airport or a packed meeting room.

Try it out yourself with our ByteBlower Wireless Endpoint.

One Reply to “Our first impressions of Wi-Fi 6 devices”