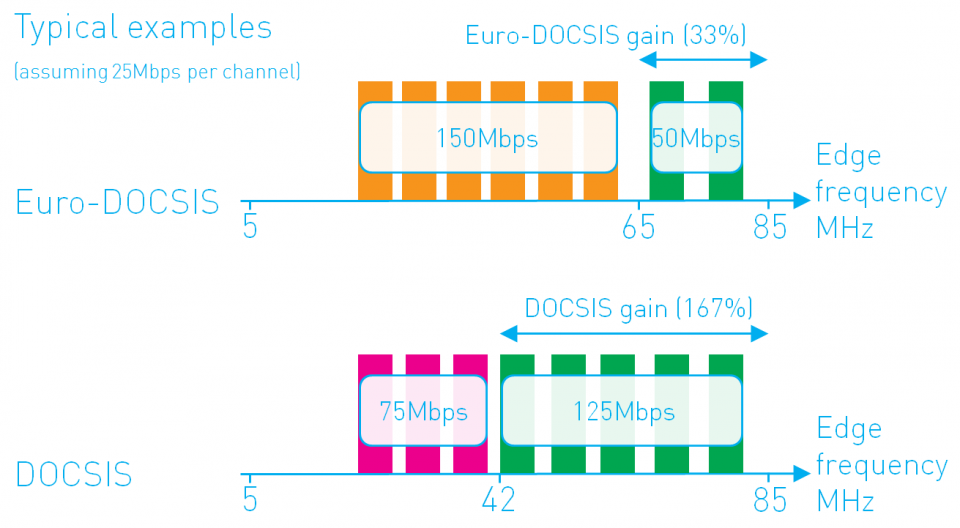 More is better! It’s true for many things, and the upstream frequency range for (Euro-)DOCSIS is one of those things, but like so often in life, it doesn’t come for free. When considering extending this range it’s good to know the benefits, possible issues you may encounter, and the alternatives. That is exactly what this article offers.

Increasing market demands of digital broadband services continuously challenge the limits of the HFC network capacity. When looking at the upstream, a higher throughput can be achieved by increasing the spectral efficiency for example. Using a higher qam modulation though, requires a higher signal-to-noise ratio (SNR) or a better error correction. In (Euro-)DOCSIS 3.0, the highest order upstream modulation is qam64 and the switch to OFDM+LDPC-BCH encoding, which comes with a higher spectral efficiency, only kicks in from DOCSIS 3.1.

Another way to achieve an increase in capacity is by splitting the network into smaller upstream nodes with less customers per channel. This would even have an extra benefit: less subscribers on the node means less noise aggregated to this node from in-home networks, resulting in a better SNR. But this segmentation comes with a certain price of course.

This blog post discusses a third option to increase the upstream capacity. That is increasing the available bandwidth by migrating the US/DS-split up to a higher upstream frequency, also called the DOCSIS extended upstream frequency range feature or the “midsplit”.

The original DOCSIS design provided an upstream frequency range from 5 to 42MHz and a Euro-DOCSIS one of 5 to 65MHz. From 2.0 on, this range could be stacked with channels of up to 6.4MHz. Using qam64 that gives a throughput of approximately 25Mbps per channel. For DOCSIS you can theoretically fit 5 of those channels, and for Euro-DOCSIS that is 9.

In reality however it is hard to use the frequencies from 5 to 20MHz, due to ingress and impulse noise in that range. Also the highest frequencies are often not used (filter edge), with upstreams only going up to 60MHz for example. This means that the upstream frequency range, and consequently the capacity, especially for DOCSIS, is rather limited.

By going up to 85MHz, migrating to what is called “the midsplit”, the capacity for DOCSIS is more than doubled, and in reality even a lot more. Another advantage besides this extra capacity, is that the benefits of upstream channel bonding (such as partial service, load balancing) also become more accessible. The following typical examples clearly show what the gains could be.

This all sounds very nice and at this point you could ask why not everyone is using this extra capacity yet. When you have a modem that supports this feature (check capability TLV5.20), the CMTS obviously has to be configured accordingly. That’s not that hard to do, the real obstacle is that the network has to be equipped for this frequency boost as well. This means that its components (such as diplex filters, network termination units,… ) have to be suited to work with this extended frequency range. And often that means a substantial network upgrade!

When these issues are tackled, it has to be taken into account that some legacy customer premise equipment (TVs, STBs) may take the 54-85MHz band as input (used to hold TV-channels). Bad in-house splitters could lead to high upstream power going to these devices with possible failures and disturbances as a consequence.

One more thing to keep in mind is that with the FM-band starting at 87.5MHz, the usable frequency range stops around 80MHz (filter roll-off).

And also important is that the upcoming DOCSIS version 3.1, defines the upstream frequency range from 5 up to 204MHz (highsplit). This would mean another network upgrade, so it might be useful to choose to wait for that migration.

By now it should be clear that the extended upstream frequency range feature introduced in (Euro-)DOCSIS 3.0 is a good way to get more upstream capacity, and there are several reasons to use or not use it. There are alternatives to squeeze more upstream capacity from the cable network, and depending on the current plant configuration, going for the midsplit might not even mean that much gain. For DOCSIS the feature is more useful than for Euro-DOCSIS, but when you’re not using up to 60MHz yet, it could be the significant boost you need. So maybe you have plenty of upstream capacity. Maybe you find a different solution to your capacity deficit. Maybe you can combine this move to the midsplit frequency range with some other infrastructure update. Or maybe you want to wait for 3.1. But one thing is certain, this extension is here now and can make a huge difference.

4 Replies to “Gain upstream capacity by extending its frequency range”