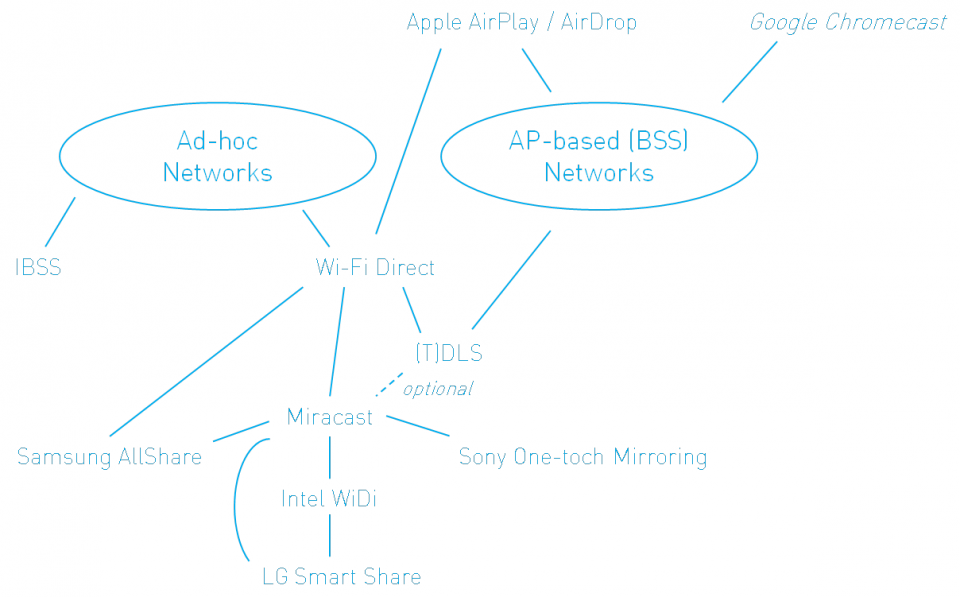 With smartphones, tablets, laptops and smart TVs ruling the world, sharing and streaming content from one device to another over Wi-Fi becomes more and more important. The list of new protocols to achieve this goal is still booming. Companies are trying to convince the customer with promising terminology like Apple® AirPlay®/AirDrop®, Samsung AllShare™, Intel® WiDi, Sony® One-touch Mirroring™ and so on. But how do these protocols work; how do they relate to Wi-Fi CERTIFIED™ standards like Wi-Fi Direct®, (T)DLS® and Miracast®; and most important: what about interoperability? Let’s find out!

Wi-Fi is the new wire

In 2013, more than two billion Wi-Fi-enabled devices shipped (according to ABI Research, 2014). The market is forecast to continue to grow rapidly over the next five years as the technology is adopted across a wide variety of markets, including consumer, mobile, automotive, and emerging markets. Wi-Fi is widely available in homes, Wi-Fi hotspots, and enterprise environments, and is found in many types of devices, including laptops, cameras, media players, printers, TVs, gaming devices, tablets and mobile phone among others.

Most of the time Wi-Fi devices are connected through a BSS (Basic Service Set), which means that they are connected to a central AP (Access Point). Before we can connect to such an AP, we need to know the SSID and, if enabled, the security credentials. However, there are certain situations where this kind of architecture with a central AP is undesirable; a few examples:

In the early days of Wi-Fi, there was a feature, called ‘Ad-hoc’ (or IBSS) to allow Wi-Fi devices to connect with each other without the need of an AP, but this was cumbersome to configure and customers demanded more user-friendly solutions, especially after Apple came up with AirPlay™.

These user-friendly (I let the reader decide if this requirement is fulfilled) solutions can be split up in two large groups: the official (certified) standards from the Wi-Fi Alliance® and the solutions, created by vendors, which build upon/extend these official standards or, depending on the vendor, are completely proprietary. Let’s start with an overview image to see how all these solutions relate to each other.

And now it’s time to dive into each of these protocols. Let’s take a look at what falls under the Wi-Fi alliance umbrella first and then continue the overview with the various implementations.

The Wi-Fi Alliance is a global non-profit industry association. The more than 650 members come from across the Wi-Fi ecosystem and share a vision of seamless connectivity. Since 2000, the Wi-Fi CERTIFIED seal of approval designates products with proven interoperability, industry-standard security protections, and the latest technology. The Wi-Fi Alliance has certified more than 20,000 products.

Wi-Fi CERTIFIED Wi-Fi Direct is a certification mark for devices supporting the technology to connect directly with each other, making it simple and convenient to do things like print, share, sync and display. 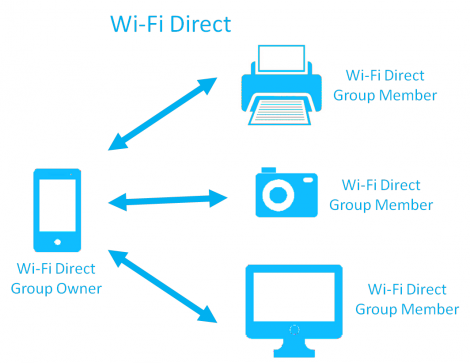 Wi-Fi CERTIFIED TDLS (Tunneled Direct Link Setup) is a certification program for devices implementing technology enabling them to connect directly to one another after they have joined a traditional Wi-Fi network (BSS). The tunneled version was introduced to allow TDLS capable devices to setup a session through an AP that is TDLS agnostic. While Wi-Fi Direct is designed to create a wireless network between devices without the need of an AP, (T)DLS is designed to enhance the throughput between devices on an existing wireless network (AP or Wi-Fi Direct based).

As a result, TVs, smartphones, cameras, printers, PCs, projectors, and gaming devices, for example, are able to connect directly to each other to transfer content and share applications easily and as fast as possible (not limited by the AP’s maximum speed). In the home and enterprise environments, TDLS technology greatly enhances the efficiency of communication between different devices in a network, such as streaming (video and audio), data migration and data backup.

The establishment of direct links between TDLS-certified devices requires no user intervention. Wi-Fi TDLS products are based upon the IEEE 802.11z standard amendment. They have been tested and certified for this technology in addition to core interoperability and current-generation WPA2 security. 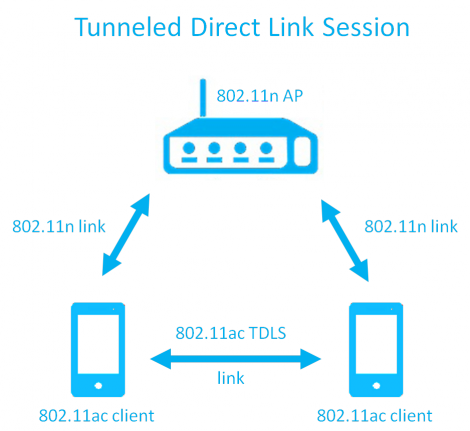 Wi-Fi CERTIFIED Miracast is a solution (based on the Wi-Fi Alliance Wi-Fi Display Specification) for seamlessly displaying (mirroring) multimedia between devices, without cables or a network connection. Users can do things like view pictures from a smartphone on a big screen television, share a laptop screen with the conference room projector in real-time, and watch live programs from a home cable box on a tablet. Miracast connections are formed using Wi-Fi Direct, so access to an AP is not needed. Miracast optionally also supports TDLS.

Unfortunately, there are 2 big issues with the Miracast technology:

Many vendors have tried to come up with a solution to bring a clean and slick interface to the user for these features like sharing a picture, printing a document, streaming a video. Some of them are building these solutions using one or more of the standards from the Wi-Fi Alliance; however, there are also vendors that just started from scratch.

Specifically for audio/video streaming, one can easily say it all started with Apple’s AirPlay and since that, all vendors (and even the Wi-Fi Alliance itself) have tried to come up with their alternatives for this popular Apple-only feature.

Intel WiDi is an Intel technology based on Miracast and provides following features:

Intel WiDi is targeted for Intel-based PCs, laptops and tablets (native support from Windows® 8.1 on), but never saw much uptake as not many displays (like TVs) implement the WiDi receiver capabilities.

AllShare is Samsung’s implementation of the Miracast protocol. All the latest devices from the Galaxy® range support this technology, as well as their Smart TV range.

Sony has come up with a technology to set up sessions for content sharing, screen mirroring, audio streaming using NFC (Near Field Communication) technology. By simply making physical contact (‘tapping’) between two devices you would like to pair (Sony Xperia™ smartphone/tablet, Sony BRAVIA® tv, Sony’s wireless headphones, …), a wireless connection is established between them which allows content sharing, screen mirroring, audio streaming from one device to the other.

Most of these features are based on the Wi-Fi Alliance standards Wi-Fi Direct (Sharing/Mirroring) and Miracast (Mirroring).

LG has a feature called SmartShare incorporated in their webOS® operating system (LG Smart+ TV products). SmartShare is a media platform that supports screen mirroring both from and to your TV, streaming content from your mobile device to your TV, or just controlling your TV over Wi-Fi through dedicated apps on your smartphone/tablet or through a dedicated software packet on your laptop. Wi-Fi connections between the devices can be established using an existing BSS or Wi-Fi Direct.

Next to Smart Share, LG’s webOS also supports Miracast screen mirroring, with, for Android devices, NFC-support to pair the devices (much like Sony’s One-touch Mirroring technology) and, for Intel-based devices, support for Intel WiDi technology.

AirPlay is Apple’s wireless display standard. It allows you to stream video from an iPhone®, iPad®, or Mac® to an Apple TV®. Using AirPlay, you can display the contents of your Mac’s desktop, start a video in an app on your iPhone and “push” it to your TV, or play a game on your iPad and mirror your display on your TV.

Apple’s AirPlay standard is flexible enough to work in two different ways. It can be used to just mirror the contents of a device’s display, or use a streaming mode that is smarter. For example, you could play a video in an app on an iPhone and use the playback controls on your iPhone to control the video on your TV.

AirDrop is Apple’s wireless standard for transferring files between Apple devices. Since Yosemite (for Mac computers) and iOS 8, it is also possible to share between a Mac and iOS devices. While AirDrop in iOS 7 was using the Bonjour protocol over Bluetooth to discover nearby devices, iOS 8 introduced the support for Wi-Fi Direct sessions (though it’s not compatible with generic Wi-Fi Direct implementations like the one Android uses), provided that the device support it (iPhone 5/iPad 4th generation/iPod Touch® 5th generation and newer).

AirPlay and AirDrop work very well, but they have a big limitation — they only work with Apple devices.

Qualcomm’s AllPlay is a whole-home wireless audio technology that consists of two parts:

AllPlay offers advantages over relying on a mobile device’s DLNA and Apple’s AirPlay technology to send music to speakers as these technologies allow mobile devices to stream audio to only one speaker at a time via a Wi- Fi network. AllPlay-equipped mobile devices, in contrast, can stream on a peer-to-peer basis in direct mode over Wi-Fi to multiple speakers at a time, and they can do it without connecting to a home’s Wi- Fi network.

Other protocols that didn’t make it to this blogpost

It seems that everybody, from the Wi-Fi Alliance over SoC producers up to the mobile device vendors, is trying to come up with its own holy grail technology for content sharing, syncing and streaming over Wi-Fi. While some of these technologies and protocols work really well (we might look at some examples in detail in future blog posts), it often comes down to finding out which of your devices support the specific feature you want to use and often you need to stick to the same vendor.

I think that the biggest reason for these interoperability issues is the fact that these features always require a ‘sender’ on one side and a ‘receiver’ on the other side. While a vendor, at first, might lean towards implementing an existing (standardized) solution for its ‘sender’ device, he might be forced to come up with a new solution as the targeted ‘receiver’ devices, currently on the market, don’t yet support the existing solution or lack important features. A clear example for this assumption is the fact that Google first introduced Miracast into the Android OS, but as the TV vendors were not picking up the Miracast standard fast enough, Google decided to solve the problem themselves by bringing the Chromecast dongle to the market as an end-to-end solution.

The Wi-Fi Alliance has an important role to play in this story and that is to bring ‘sender’ and ‘receiver’ vendors closer to each other and helping them with standardized protocols.