5 reasons why the adoption of IPv6 takes so long 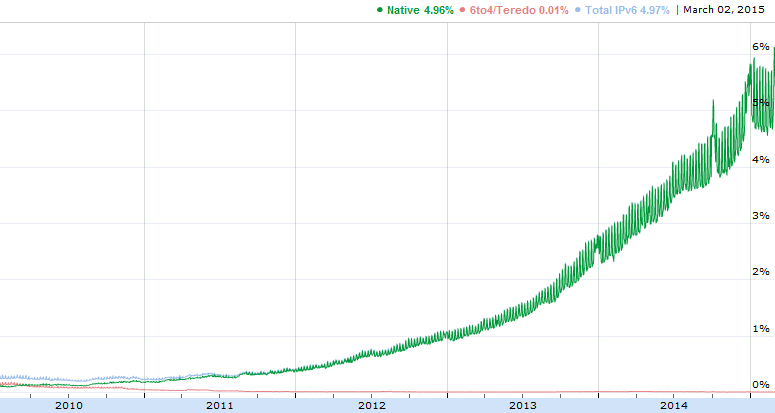 The internet is still expanding. Even more, we’re facing a major explosion of the number of devices connected to the internet. The rise of smartphones, wearables and the Internet of Things are evolutions that will expand the number of connected devices to numbers unseen so far. The transition to IPv6 is inevitable, but why does it seem to take so much time?

The internet is made up of millions of routers and switches. Those were initially designed to work with IPv4. Replacing or upgrading them takes time and budget.

For the edge network, the solution is time. End-user equipment is replaced regularly in general, but it exists out of billions of devices. There will still be many old home gateways, print servers, … unaware of and incompatible with the IPv6 protocol.

For the core network, replacing core routers with expensive hardware is something which isn’t done everyday. This means this transition even takes more time and money.

Reason 2: NAT to the rescue

IPv6, initially released in 1998, extends the total number of addresses to more than 7.9×10^28 times as IPv4 does. The IPv4 address exhaustion was the major driver to develop IPv6.

But by the time the IPv6 specification had matured, NAT was already used all over the internet, extending the lifetime of the IPv4 protocol. NAT can be deployed incrementally in the internet at a low cost while also providing some basic security. On the other hand, NAT also comes with some drawbacks and will not be able to scale far enough for future needs.

During the design of the IPv6 protocol, backward compatibility was not on the requirements list. According to Leslie Daigle, Former Chief Internet Technology Officer for the Internet Society, this lack of compatibility with the current IPv4 protocol was the single critical failure.

Because of this, the transition towards IPv6 does not provide a single, standardized solution to communicate with devices and systems that still run IPv4.

The lack of compatibility requires operators to run IPv4 and IPv6 concurrently for the foreseeable future. This means a higher cost in maintenance now, with benefits becoming only visible when other networks are also switching to IPv6. There is no direct benefit of being an early adopter. Nobody will switch to IPv6 as long as none of their contacts is switching too.

Reason 5: It doesn’t reach the eye

While the adoption of IPv6 goes much slower than initially planned, the transition is already taking place. At this point, somewhere between five to six percent of traffic reaching Google is IPv6 traffic. Not much, but at least a 2 percent increase from last year. More importantly, the transition is gaining momentum and going faster and faster each month.

Google keeps statistics on the percentage of users that access Google over IPv6, and as of today that looks like this:

But, many people just don’t know. The end-user is unaware. The current operating systems are ready for IPv6 and, if available, will use it seamlessly in conjunction with IPv4.

IPv6 has been slowed down for many reasons, but the transition already started and we can expect a faster and faster adoption in the years to come. IPv6 doesn’t arrive with the big drum but gets widely applied in silence all over the world.